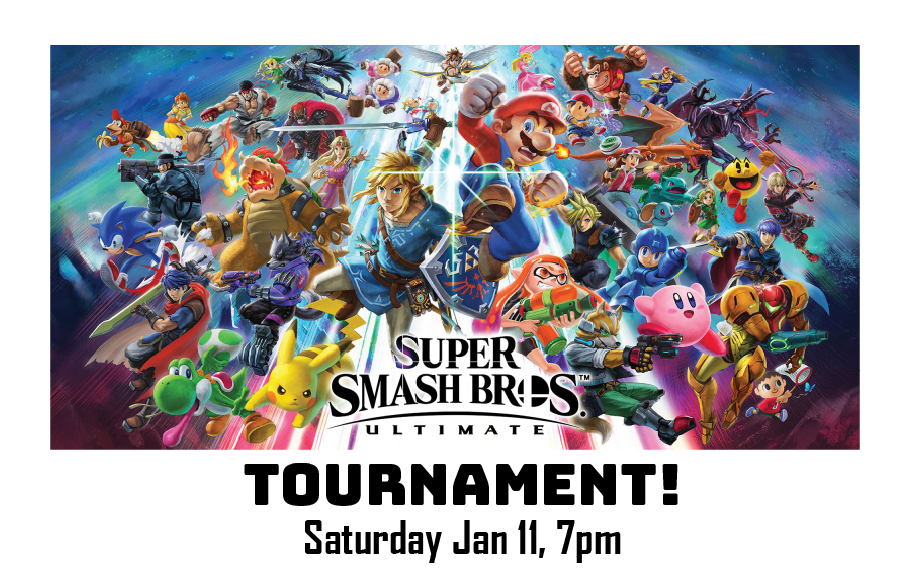 Bring your friends and challenge other area gamers in Super Smash Bros. Ultimate for the Nintendo Switch! All competitors register at the Games Club on the day of the tournament.
Prizes for top players will include Games Club gift cards and memberships, so bring your top game and play to win!

Game settings: 3 stock, 7 minutes, Final Smash Meter: Off, Spirits: Off, Damage Handicap: Off, Stage Selection: Anyone, Items: Off and None, First to: 2 Wins, Stage Morph: Off, Stage Hazards: Off, Team Attack: On, Launch Rate: 1.0x, Underdog Boost: Off, Pausing: Off (If used, results as a loss of a stock), Score Display: Off, % Show Damage, Yes, Custom Balance: Off, Echo Fighters: Separate, Radar: Big, ⅔ Games
Allowed Controllers: Nintendo GameCube, Nintendo Pro Controller, Nintendo Joy-Con, SmashBox
Amiibo’s are banned
Starter stages: Battlefield, Final Destination, Pokemon Stadium 2, Smashville, Town And City
Counter-pick stages: Kalos Pokemon League, Lylat Cruise, Yoshi’s Island (Brawl), Yoshi’s Story
First stage is decided by (Rock Paper Scissors), best of 1
Following stages decided by winner striking 2 stages from all stages and then loser choosing
Winning player is not locked into the same character for the next match, but they MUST pick a character before the loser
You may NOT pick any stage you have previously won on during the set UNLESS mutually agreed upon
If the game ends with a self-destruct move, results screen will determine the winner
Sudden Death will result in a 1 stock/2 minute play off match